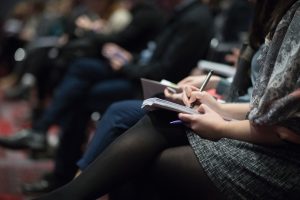 On July 16th, 2019, Dr. Kimberly Mueller presented some of CCANDL’s scientific findings at the Alzheimer’s Association International Conference 2019 (AAIC) in Los Angeles. While CCANDL studies multiple areas of communication, Dr. Mueller specifically presented on detecting signs of Alzheimer’s through speech and language. CCANDL’s research has revealed that people who are better at recalling proper nouns (names, titles, places) have a lower risk for amyloid positivity. Amyloid protein is a sign of Alzheimer’s disease as people with significant amyloid deposits in their brain tend to develop or have Alzheimer’s.

Dr. Mueller had the idea to see if there was a correlation between what parts of speech people recalled and Alzheimer’s disease. To do this, she used the Logical Memory test. This test is composed of two stories. The psychometrist (the person testing a participant) reads the stories aloud, and the participant recalls everything they can from the stories. The psychometrist records the participant’s responses. CCANDL partners with Wisconsin Registry for Alzheimer’s Prevention (WRAP) study which has conducted this test thousands of times for thousands of participants. Additionally, WRAP records participants’ amyloid positivities. Dr. Mueller analyzed this data, and she found that participants who could recall the proper nouns in a story had a lower risk for amyloid positivity.